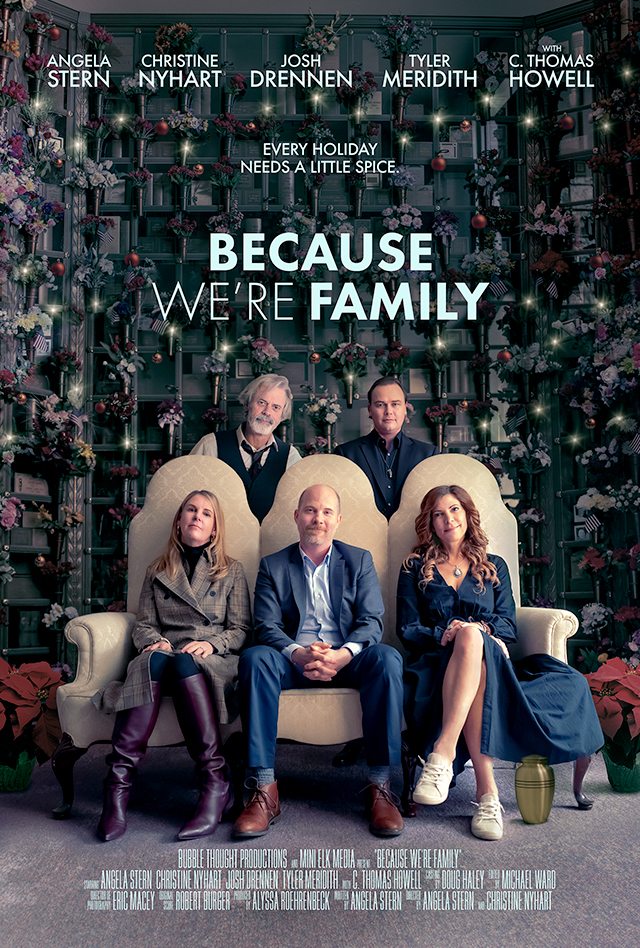 We had the honor of interviewing “Because We’re Family” co-directors Christina Nyhart and Angela Stern.

What are the key responsibilities of a co-directors during pre-production? (Christine Nyhart)

Finalize the budget  and locking  the shooting  script.  Angela  and I along  with  our  producers  Alyssa Roehrenbeck and Tyler Meridith sat down  with  the script  prior to  shooting until we locked it  and  felt ready to  roll.  Selecting  the  right  cast  members.  We  had casting  director,  Doug  Haley,  to help us  with this.  Securing  the locations for  the  film.   We still feel so fortunate  to have  stumbled upon  the  family home  in  Eastmoreland,  Oregon.  It was the perfect setting.  Meet with our crew  and  discuss our vision. We   were in the right  hands  with our  Direcdtor  of Photography,  Eric  Macey,  and  the    team that  he and Alyssa  helped us assemble.  Our crew had faith in them  which  made our  job  a  lot easier.

What are your strengths as a co-director? (Angela Stern)

Co Directing is very different than being the lone wolf in charge. It’s a tricky thing to match opinions and have them blend into one cohesive vision. For Christine and me, the collaboration came very naturally. We are long time friends and have worked together on stage many, many times. Our bond is familial even though we are very different people. Our differences turned out to be our biggest assets. Oh yeah, we argued. A lot. But it was those arguments that gave way to the best possible decisions. Christine is detailed in her approach, very methodical. I am quite the opposite. I tend to think very far out of the box and love taking risks. Put those energies together and the pendulum naturally finds its happy medium.

How do you select a script and location? (Angela Stern)

The script for “Because We’re Family” wasn’t as much selected as it was written for our goals. I had been developing the script for quite a while and because we had tested the script on stage from Los Angeles to New York to Edinburgh, we knew the story had value. We always look for a script to be relatable but entirely unique as well. Location was an easy decision. We knew right away that Portland, Oregon had the look that we wanted, with the grayish weather, the local charm of the community and the architecture. Christine grew up in Portland and when I visited for the first time, I was convinced that the city’s vibe fit this film’s family very well.

What is the most common problem you face as a director?  (Christine Nyhart)

Schedule limitations based on budget  is  a  common problem  and one we encountered.   We were a   small production so we  had to  shoot many pages in  a  day  which   means  a  constant  race  against the  clock.  Adding to that, one of our  locations  fell out  last minute. We  had  to  scramble  to  figure out  a new  location  which  set us  back  and  cost   more money.  Time equals money.  And lastly, weather, weather and weather!  Always a challenge  on  a production.  Especially with the rain in  Oregon.

What inspires the projects you create and/or are a part of? (Angela Stern)

My inspirations have always come directly from my life. I am drawn to stories that are character driven, dialogue that is unique, stories that can come alive on a screen with not only vibrant visuals, but with real relationships between actors.

Tell us more about what brought you to this career path and why others should choose this career too?  (Christine Nyhart)

I was inspired  by  an alumni  from my  college that  came to speak about worked  in  production  in  Los  Angeles.  Her name  was Kim Pendergast.  I knew then that I wanted to be a film major and work in entertainment.  I guess I’m not the 9 to 5 type.  And the idea of being in an industry surrounded by creative people sounded appealing to me.  I’m also a visual person so…  need I say more?

How did you break into film directing? What advice do you have to give others that want to break into the industry?  (Angela  Stern)

I have directed theater for many years. I adore the process of taking something from the page to the stage. I always knew I wanted to be behind the camera, but the break came from taking a huge risk. Christine and I had originally intended on hiring a director but after careful consideration we realized that we had an amazing opportunity in front of us: to direct the project we believed in so much, our way. The best advice I can give to anyone is to never let fear define you. If someone isn’t opening a door for you, open one for yourself, and then invite others to walk through with you. Be grateful for each challenge because that is where you learn. And most importantly, film is a collaborative art. It takes a solid team to bring any vision to life. Surround yourself with people who care about the art and who want to grow and create with you.

This is a fantastic time for women in film. Embrace that! No matter what your age, gender, orientation, race is, you have a voice that should be heard. There are opportunities that women never had before. Take smaller projects if they come along and refine your craft, find your voice. Create your own content as much as you can. Spend time shooting things for fun, even on your iPhone, so you keep the joyful spirit of creating alive in you. Remember that this is a business but like all business, a calculated risk is often a good thing. Do not let any rejection get you down. You will have many, many rejections along the way. Never give up.

Where did the idea for the film BECAUSE WE’RE FAMILY come from?  (Angela  Stern)

“Because We’re Family” was inspired by the sudden loss of my beloved mother in 2014. Christine lost her mother shortly after I did and our shared grief was comforted by our mutually inappropriate sense of humor. As my mom always said, “if you can’t laugh about it, you can’t cry about it”. I had to give a voice to that grief in order to process it. These characters, while fictional, are all inspired by the people that I know. The story is an extension of some of those life altering moments that we all experience.

COVID  did  not affect the production.  Well, not until the very end.  We were close  to  wrapping the  film  in  February  2020  when half our crew  got  sick.  We didn’t know about COVID then so we  kept  filming.  It’s a miracle  we made it through.  COVID then  slowed  the post-production  process down.  Our  editor  was  based  in Portland and being by  his  side  during  the editing  process  became nearly Impossible.  It slowed things down  substantially.

The film is about a dysfunctional family dealing with a death.   Do you have a special or crazy memory you’d like to share about your family? (Christine Nyhart)

My mother was diagnosed with terminal  lung  cancer  a week  before  the  sale  of  her  house  closed in  Dallas, Texas.  We had to move her into a Holiday Inn  and  she  was very ill.  Four  of  my  siblings,   including me,   were in that suite… there  was  a lot of  fighting,  crying,  and  laughing.  It was an intense and  emotional  time.

Was there anything different or special that happened during the filming/ on set?  (Christine Nyhart)

While shooting  the  Thanksgiving  scene  C.  Thomas  Howell’s character serves pie. We did many, many   takes of  that scene (as it’s set  around a table)and  we needed more  pies  and  more  whipped  cream  than  you  could ever  imagine.  We had Production  Assistants racing  all  around  town  in  search of pumpkin pies.  And our  Production Coordinator, Hannah   Powers,  made  a miracle  amount  of  whipping  cream  on  the fly. In the same  scene,  we  needed  a cooked  turkey but we hadn’t  cooked  the  turkey.  Alyssa  and our make up artist, Jessie  Hafer,  came up with  an insane idea.  Jessie  airbrushed  the frozen turkey and  it  looked  amazing!  Who  would  have thunk?

How does it feel having the film premiere at Dances With Films? (Angela Stern)

Absolutely thrilling. We are silly with excitement and full of immense gratitude. The team at DWF is top notch. Each and every one of them is deeply devoted to celebrating independent film. They have created a festival that is wholly dedicated to filmmakers from every genre all over the world. We are so lucky to be a part of the 25th annual DWF Festival.

Where can people get tickets/see the film?

HOLIDAY AT ALL COST – World Premiere at “Dances with Films”

August 31, 2021 Barbara Keer Film, TV & Books 0
Spread the love
Spread the love Stevan Lee Mraovitch’s HOLIDAYS AT ALL COST Makes World Premiere at Dances With Films (DWF 24) September 7, at 7:00pm. This  film moves on to FESTIVALS ACROSS EUROPE,CANADA AND the US and IN SEPTEMBER/OCTOBER Paris, France. After many years […]

DREAMOVER – Shown in person at “Dances With Films”

September 2, 2021 Barbara Keer Film, TV & Books 0
Spread the love
Spread the loveDREAMOVER, a haunting, fascinating, and compelling film is to be shown in-person at this year’s Dances With Films(DWF24) on Sunday, September 5 at 9:30 PM in Los Angeles at the TCL Chinese Theatre in Hollywood. This film is a prodigious achievement […]