In time for Women’s History month comes The Girl Explorers by Jayne Zanglein. Time and time again women have proved that they can do anything they set their mind to. Unfortunately, for many women in the book; their stories, discoveries, and explorations were downplayed by the media as “mere women” or deemed “reckless”.  Roy Chapman Andrews, president of the men-only Explorers Club , who Zanglein notes, declared  in 1932 that “women are not adapted to exploration”. 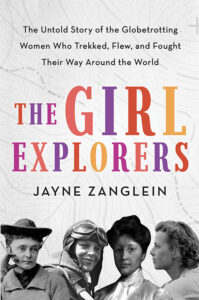 I am happy to report that The Girl Explorers details how wrong Andrews was with his statement. We dive into the story of Andrew’s declaration which paved the way  to the founding of the Society of Women Geographers. An organization of adventurous female world explorers—and how key members served as early advocates for human rights and paved the way for today’s women scientists by scaling mountains, exploring the high seas, flying across the Atlantic, and recording the world through film, sculpture, and literature.

Members included explorers, scientists, anthropologists, ethnographers, writers, mountain climbers, and ethnographic artists and musicians.  I learned all about Blair Niles, one of the founders, along with Marguerite Harrison producing and starring in one of the first ethnographic films, and Gloria Hollister becoming the first woman to go beneath the sea in a bathysphere, Annie Peck setting mountain-climbing records, Amelia Earhart setting flying records, Pearl S. Buck winning the Nobel Prize and the Pulitzer Prize. 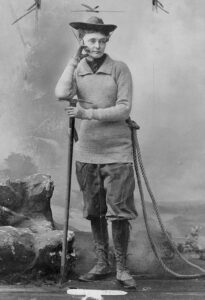 I wish I could say that I had heard more of these women and their contributions before I opened the book. There was only two that I can say I knew by name. And these two were only a few of the women explorers that I learned about in grade school or heard about repeatedly. Not knowing the vast amount of other women that had broken barriers and made an impact across so many areas. I would have loved hearing more as a young girl. 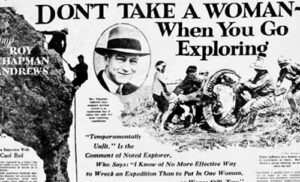 And this is why I enjoyed The Girl Explorers. While diminished, these rebels and history makers in their time left a mark and they should be known. As noted by Zanglein,  Mary Ritter Beard summed it up as, “Without documents; no history. Without history; no memory. Without memory; no greatness. Without greatness; no development among women.” 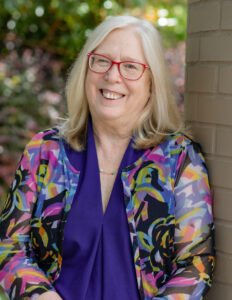 Jayne Zanglein is passionate about publicizing the accomplishments of women ignored by history and chronicling the challenges women face today. Like the founding members of the Society of Woman Geographers, she believes that marginalized groups become visible through empathic reporting, law, and democracy. Before the coronavirus curtailed her travels, Zanglein visited 58 countries, often following in the footsteps of the women featured in The Girl Explorers. She is a lawyer by profession, and this is her first non-law book. She lives in the mountains of North Carolina with her husband. Visit her at The Girl Explorers

In Conversation with BD Gunnell – An Extraordinary Film Producer

October 27, 2019 David Rabadi Film, TV & Books 0
Spread the love
Spread the loveLife can be very challenging for anyone. Now, imagine life for a women living in a man’s world. Today, I am speaking to a woman who is raising the bar and making a […]

November 10, 2018 Dianne Davis Worldwide Attractions 0
Spread the love
Spread the loveAre we Master Greek Chefs? Hardly, but my husband Burt and I learned a little about Greek cooking and and had a unique experience capped with a delicious full course dinner in Athens. […]

May 15, 2021 Splash Staff Conservation & Sustainability 0
Spread the love
Spread the loveWe have all witnessed the harrowing images. South East Asia is drowning is a literal sea of plastic. Despite the newly deployed United Nations initiative of reducing plastic pollution for ASEAN cities by […]