Spread the love
Day one of KAABOO is officially a wrap! If it’s a glimpse of what can be expected for the remaining of the weekend it will be straight fire! For the first time ever, the festival has sold out! Attendees flocked the Del Mar race track in anticipation of such a stellar lineup!
Top contenders of the day, of course, were: Gucci Mane,  Incubus, Halsey, Post Malone, Blondie, and Foo Fighters. 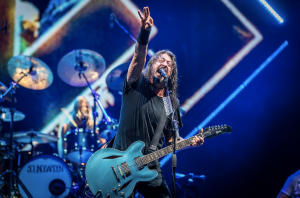 Although Gucci Mane had a day time set, that didn’t stop him from bringing the heat. Dressed in head to toe black laced with a thick layer of diamonds Gucci Mane performed his old hits and some new goodies such as his recent release Wake Up in The Sky. Produced by Bruno Mars, the single also features Bruno Mars and Kodak Black. His highly anticipated 16th studio album, Evil Genius, is slated to come out later this year. Gucci ran through hits like I Get The Bag, I Don’t Love Her, Bricks, Freaky Girl, Both and many others before turning his attention to shine on a few items from his new work. 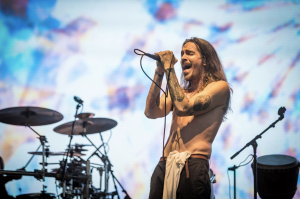 Shortly after Halsey took the stage which paired perfectly with the beautiful Del Mar sunset. The firey songstress definitely took it up a notch due to her previous festival performances were a little lackluster. She performed hits from her album Hopeless Fountain Kingdom and danced around stage. Gasoline, Castle, Now or Never, I Can Put On a Show, Strangers, Roman Holiday, Bad At Love, and at one point she even gave a shout out to the LGBT community! The true highlight was when she brought out her beau, G-Eazy, to perform their single Him and I. 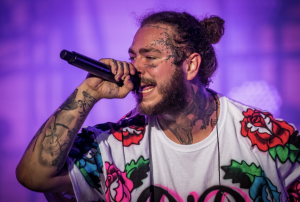 Post Malone definitely drew the crowd and put on a stellar performance. Of course the crowd lived for his hit singles White Iverson, Fall Apart,  and Rockstar, which came as no surprise. But it was his chill AF attitude and ability to connect with the crowd that kept attendees interested. 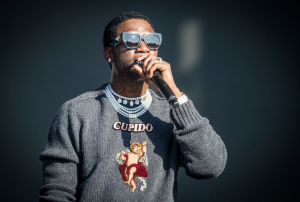 It comes as no surprise this is the most action Del Mar has seen in a long time, well since last year. However there were a lot of new additions, instellations, and attractions to make the fest rounded and truly catering to everyone.
From Hendrick’s Gin serving up delicious cocktails and giving attendees a boost, literally, in their hot air balloon to Foo Fighters playing their 120th show (in their 25 years of existence,) day one was a success!

The festival, which goes until Sunday, is sold out but you can watch all the action via live stream HERE!

All photos by aLIVE Coverage

December 10, 2021 Marilyn Anderson Entertainment 0
Spread the love
Spread the loveNew York City has always had the best entertainment the world over – visitors and locals alike can see Broadway shows, off-Broadway, cabaret, comedy, and tons of attractions and sights.  This year, there […]

August 2, 2018 Meagan Sargent Events 0
Spread the love
Spread the loveKAABOO Del Mar makes its way back to Del Mar, CA from September 14-16th and has recently announced its all star culinary line up which is equally as enticing as the heavy hitter music […]

The Hyde Review- Now You’re on the Trolley!

January 19, 2019 Yvonne Pulido Entertainment 0
Spread the love
Spread the loveAt midnight on January 17, 1920 the National Prohibition Act, also known as the Volstead Act, took effect and prohibited the sale of “intoxicating liquors” a year after the 18th amendment was ratified. […]