In the 1930’s and early 1940’s, screwball comedy movies were all the rage. Films like “It Happened One Night,” “Twentieth Century,” “My Man Godfrey,” and “His Girl Friday” titillated the crowds and kept the theaters overflowing. Interestingly, screwball comedies were developed in response to the Hays Code, Hollywood’s censorship arm. With sex a no-no, productions with farcical situations, slapstick alternating with rapid repartee, strong and stubborn females ready to fight the system, clever social class forays, and themes about love and marriage took audiences by storm. In fact, film critic Andrew Sarris described screwball comedy as “a sex comedy without the sex.” 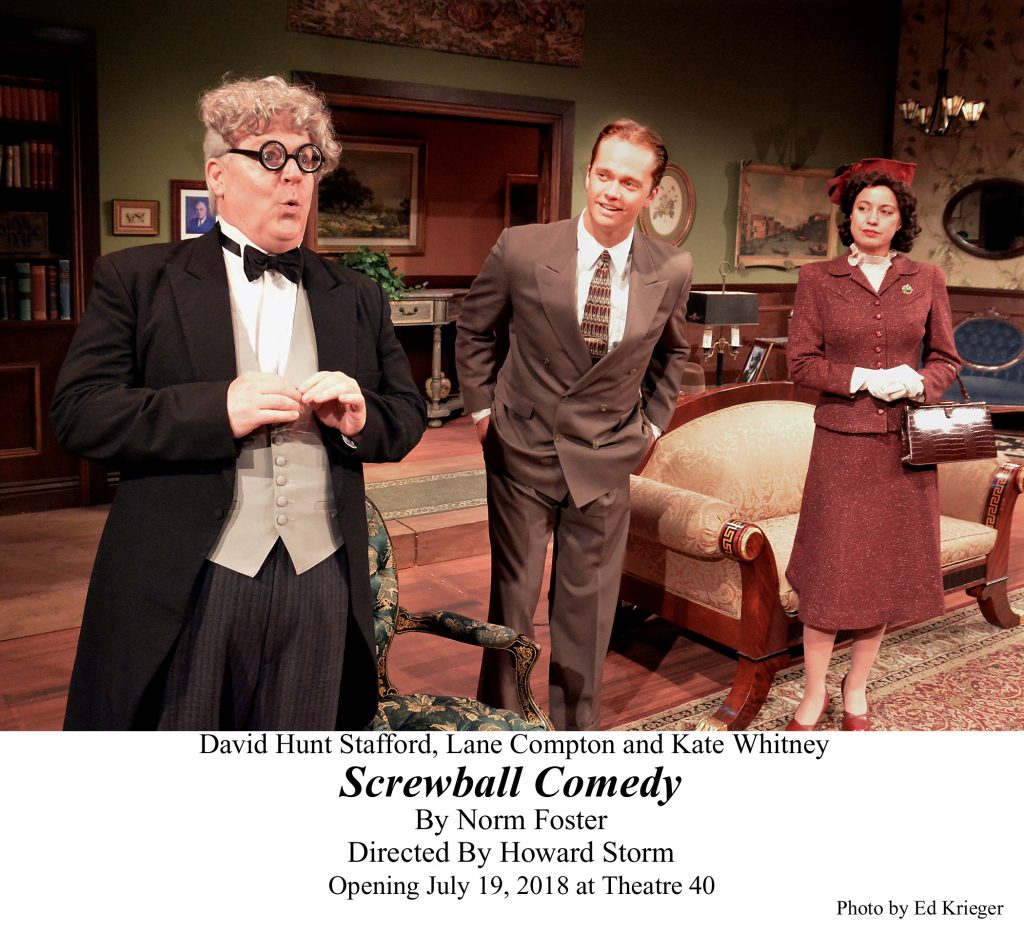 Famed Canadian playwright Norm Foster couldn’t resist the chance to poke some fun at comic screwball flicks by creating his very own SCREWBALL COMEDY. Premiering in 2017 in Canada, SCREWBALL COMEDY both satirized and paid homage to this type of film laugh-fest. It’s 1938, and irascible newspaper Editor-in-Chief Bosco Godfrey (Daniel Leslie) just laid down the law on his star reporter Jeff Kincaid (Lane Compton). It seems that Jeff has been indulging in way too much of the high life – with his writing beginning to show the effects of copious booze, loose women, and lots of sleepless nights. 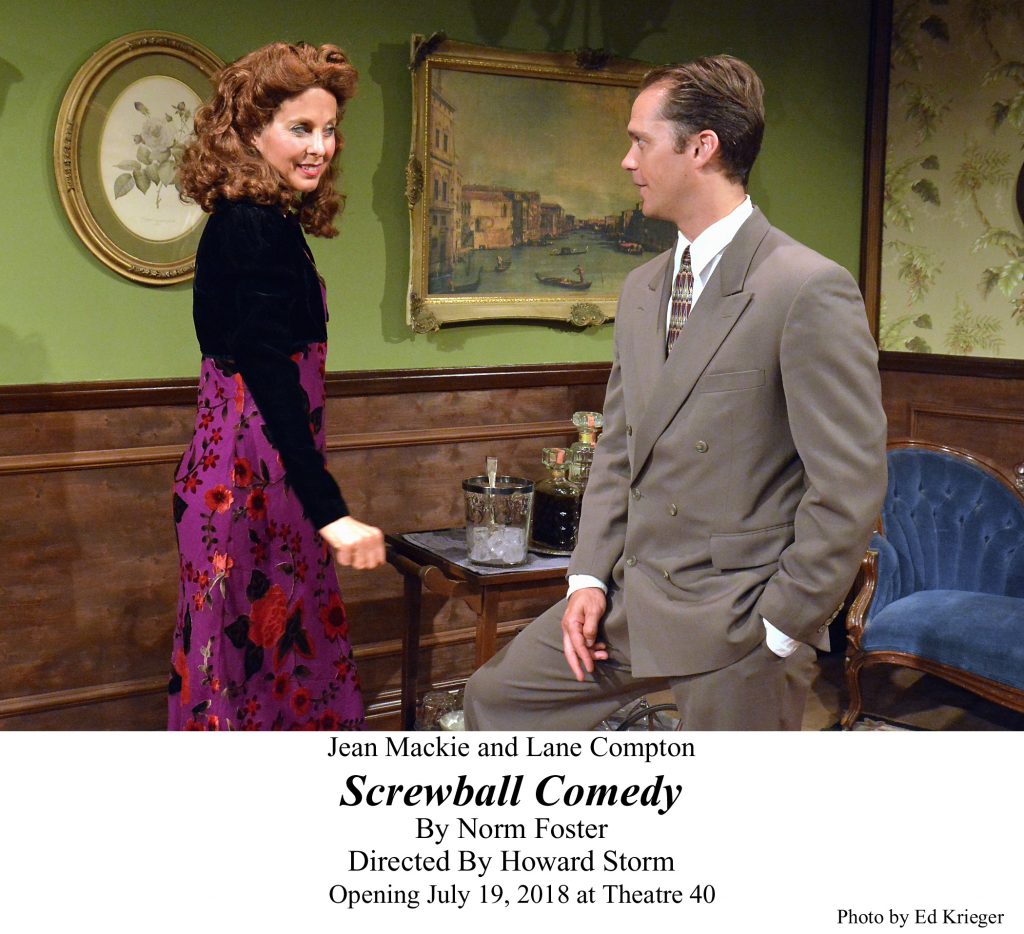 Enter Mary Hayes (Kate Whitney), a perfumer whose scents have evaporated with a tight job market. When she’s let go by the department store, Mary decides to go back to her first love, reporting. In a blink, she finds herself in a dog-eat-dog contest with Jeff for the one job slot at the newspaper. The canny editor sends the pair to cover a society wedding, and the winning writer gets that lone position. 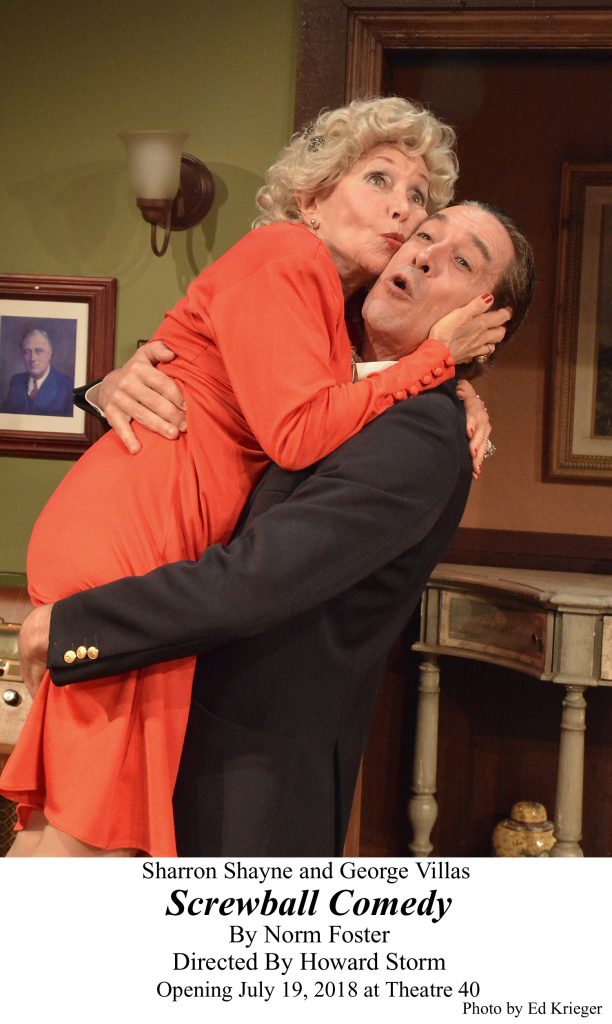 But wait. As it turns out, wealthy newspaper publisher Dolores Diddle (Sharron Shayne) has requested the coverage – and not for the reason they think. She wants to get the goods on her son’s bride-to-be Gloria Fontana (Jean Mackie), whom she suspects of being nothing but a gold digger, and of course expects the reporters to find the evidence she’s seeking. Meanwhile, she’s “diddling” with her newest beau, the suave Peter Terwilliger (George Villas), who may not be all that he seems. Under the watchful, eye of the cranky Diddle butler Reginald (David Hunt Stafford), the chaos unfolds. 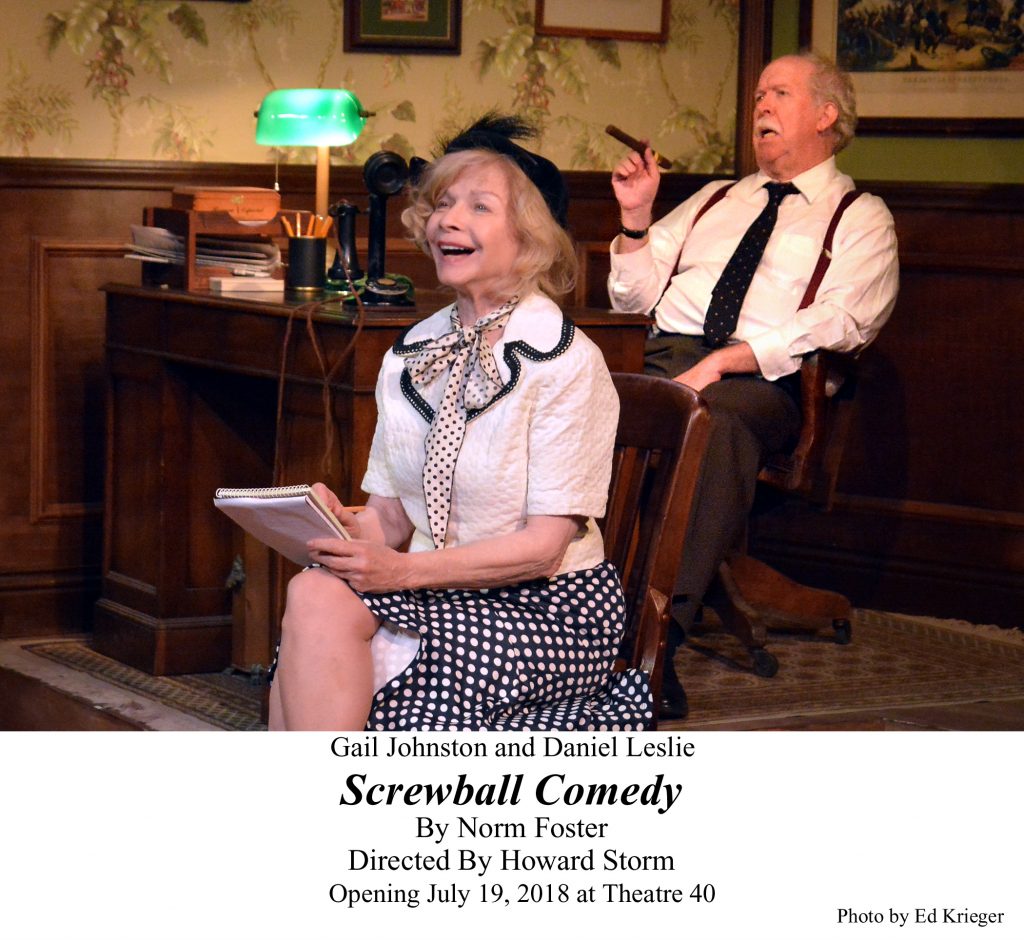 Will competitors Mary and Jeff, who hate each other with a passion, finally bury the hatchet? Will the sexy, glorious Gloria turn out to be feigning her love for the dopey Diddle heir? Will Dolores and Peter remain an item in the gossip columns? Will Mary break the glass ceiling in a man’s world? Will her sense of scent be her undoing? Will all’s well that ends well apply? You’ll have to see the play to find out. 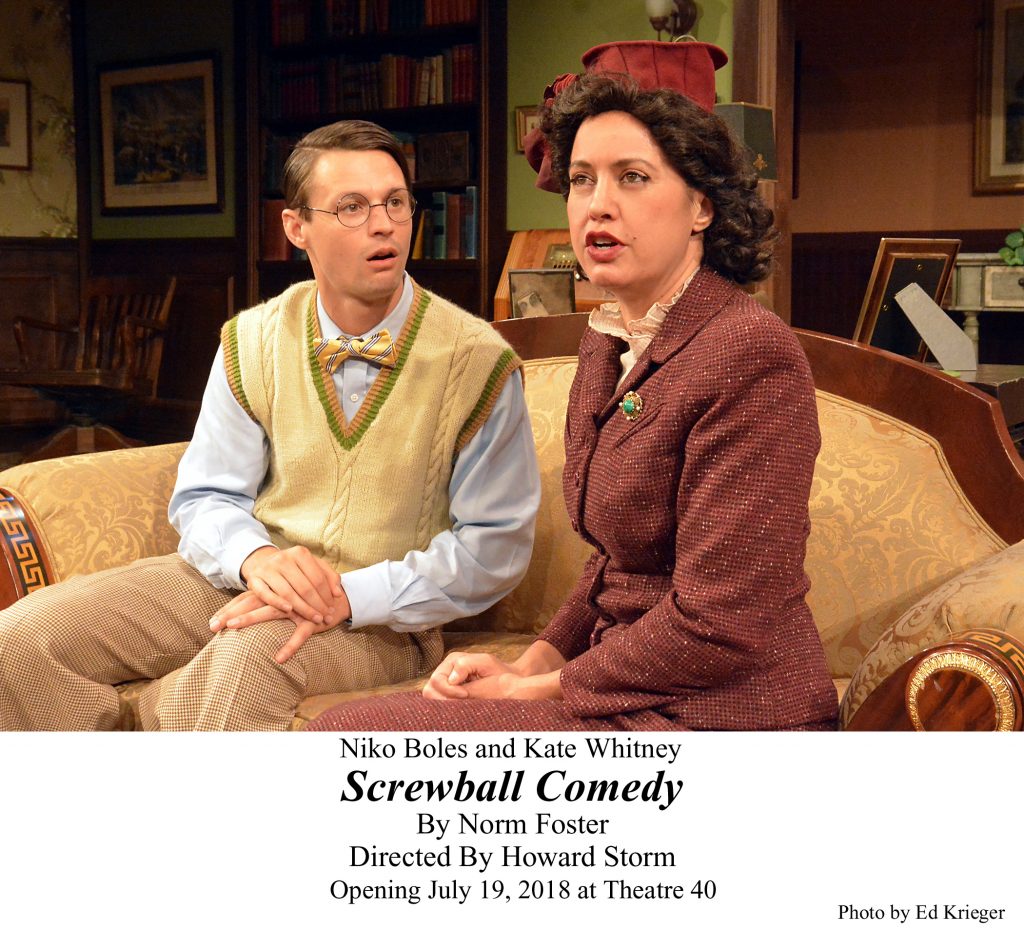 Author Foster has done a bang-up job of replicating a 1930’s/40’s screwball comedy in the twenty-first century. Director Howard Storm has a good feel for the merry goings-on and obviously knows that timing is everything. Ridiculous situations keep popping up. Uproarious one-liners abound. The main characters have the slang down pat and speak with a delightful New York twang as they quickly put the other guy down. They all converse in a language foreign to real people. The female protagonist turns out to be a tough cookie. Slapstick alternates with verbal zingers. And a fun time is had by all. Get ready to laugh up a storm when you see SCREWBALL COMEDY. 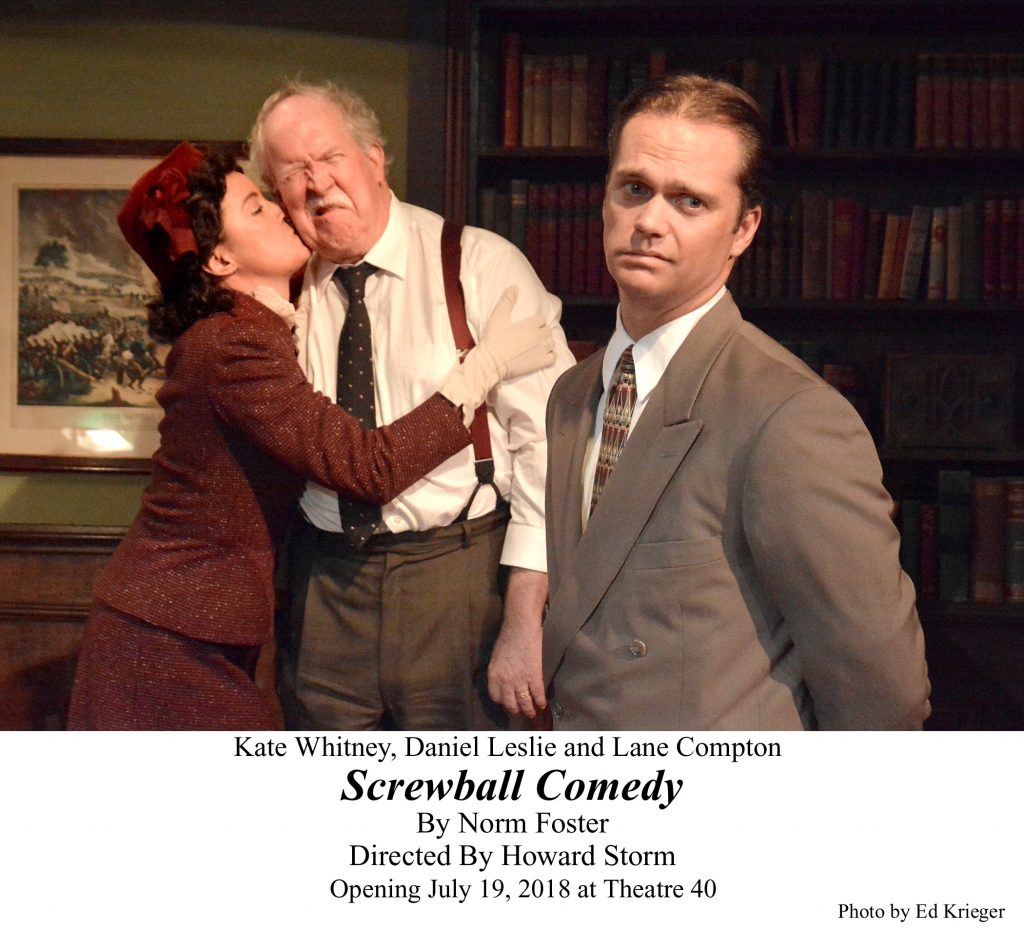 Silent Sky Review – A Woman Ahead of Her Time

March 22, 2022 Elaine Mura Entertainment 0
Spread the love
Spread the loveWritten by award-winning playwright Lauren Gunderson, SILENT SKY debuted in 2011 at the South Coast Repertory. Based on a true story, SILENT SKY tells the tale of Henrietta Leavitt, a woman whose passion […]