Crossing the continent by rail is the quintessential American journey, a 4-day experience as both a monument to the past and a revelation of its continuing legacy in the present.

America is a dream that is also a geography. Every child learns to sing “This Land is Your Land.” Something deeply true about the country is literally embodied in the song’s central idea that America belongs to every citizen as a birthright. The vast spaces, the majestic landscape, the infinite sky have all made the American psyche what it is. It is one thing to imagine it, however, and another to see it with your own eyes. 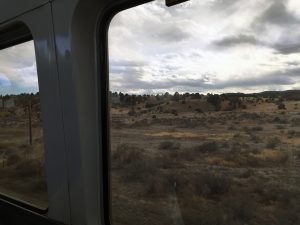 This trip should be on every American’s bucket list: to travel from coast to coast by train. It’s true that you can also cross the country in a car, but that is a different kind of journey, less peaceful, and one in which the driver’s perspective always includes the blacktop and painted lines of the road itself. The train trip is truly an escape, a detox from everyday life, more like a cruise where you are relieved of every care and are set free to contemplate, imagine, and absorb lasting impressions. 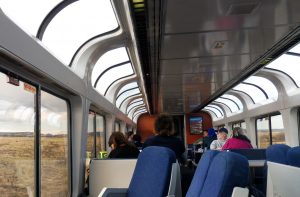 Your every need is taken care of, with meals served in the dining car as part of the package, just as it would be on a cruise. The big pleasure that the passengers all talk about is that the time on the train is a chance to slow down, a detox from the hectic pace of life. 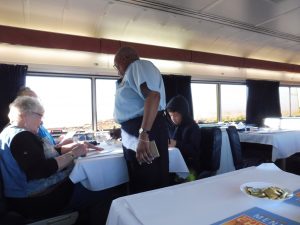 Come with me as I take the eastbound journey from Los Angeles to New York by way of Washington DC. This was the Hollywood highway in the heyday of the studios, with movie people partying all the way from the Pacific to the Atlantic. After living in LA for fifteen years, I wanted to imagine myself back in those days (minus the bathtub gin). 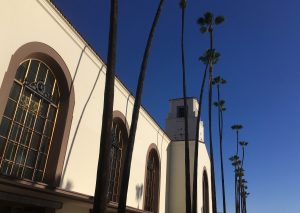 The Southwest Chief departs in the evening from Union Station in Los Angeles. This Mission Style treasure is beautiful inside and out. It has an elegance that makes me consider, just for a moment, staying in LA after all. How could I leave the palm trees, the warmth? 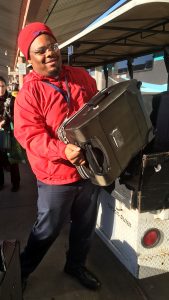 Amtrak’s Red Cap baggage handlers loaded my bags onto a cart and ferried both me and my bags to the track. The bag I have to strain to lift is hoisted easily and with a smile by my helper. 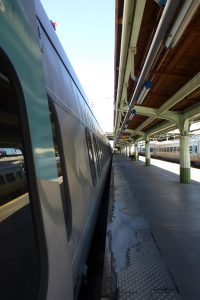 I arrived way early, so first my Red Cap took me to the Amtrak Metropolitan Lounge. The lounge is a private space for sleeper and first class passengers. They have refreshments and comfortable chairs. The attendant will see that your bags are checked for you if need be. I opted to keep mine and store them in the rail car with me so that I could have access to my things. There’s no room really, even for a carry on, in the roomette cabins themselves. The Metropolitan Lounge attendant announced when it’s time to go out to the track and the Red Caps will ferried us all over. Our train pulled in about 20 minutes before departure. Other early bird arrivals like me were there with their bags ready, excited to begin the trip. 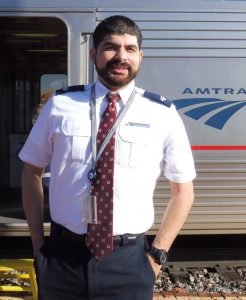 I met my sleeper car attendant who helped stow my bags and who would take care of me on the trip. The sleeping cars each have an attendant to  make sure the it stays clean and that the travelers have what they need. These folks make the morning pot of coffee that sits by the staircase, open the beds and set the linens at night and then tuck them away in the morning. For the first night on the Chief, sleeper travelers have an option of eating in their cabins, and again, the attendant takes care of delivering it to you. Basically, he or she is your concierge for the trip, keeping an eye on your needs and safety.

My roomette to Chicago was on the upper level. I settled in with just a shoulder bag.The space is too small to hold either of my suitcases, but you don’t need to worry about it with the attendant watching over the common areas. The train pulled out of town as the sun was going down. I slept with the shades open just so I would wake up with the dawn over the desert. The early glow and the impossible flatness of the terrain made me feel like I’d left the ordinary busy world behind. 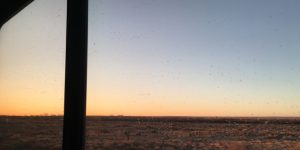 I love desert landscapes. I don’t know if I would have loved crossing them in a covered wagon at the speed of a horse in harness, but from the climate controlled comfort of the train, I could enjoy the subtle shifts as one desert environment shifts into another. Hour after hour, the world outside reflected only dryness and heat. Rock and sand dotted with scrub and cactus rolled by in austere beauty. 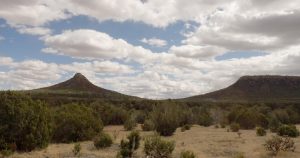 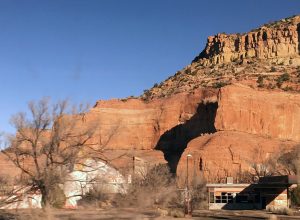 The station at Albuquerque has a western adobe style design. Many of us stepped outside to stretch our legs in the fresh air. Even the engineer took a break to soak in the day. 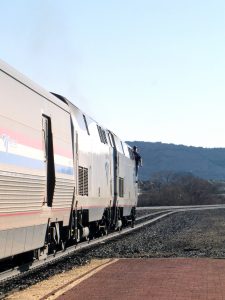 At some point we must have climbed in altitude because snow started to appear in patches on the ground. It was still too much of a desert to allow for more than a dusting.

When sunset came on the second day of rolling across desert, I had a sense of how big the West really is. 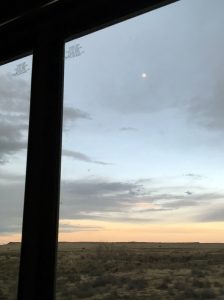 Day 3 the train headed north toward Chicago and the land and the sky started showing signs of water. Bits of green, a few trees, and then forests and rivers. After two days of desert, it was like the second night’s sleep send the train through a portal to another world. Rivers and bodies of water became a normal sight, water pooled or stretching in wide ribbons for mile after mile.

This trip was still too early in spring for there to be much green, but the plowed fields and dampness darkening the earth told a story of preparedness.

There other are sights to take in here along with the land itself. Farmhouses. Bridges. Old Fort Madison along the Mississippi River, its tiny collection of buildings was a major hub in the otherwise vast wilderness of the 1800s. Now it seems more like a toy fort than a real destination.

We rolled along the Mississippi for quite a while. Other passengers remarked on seeing bald eagles and beavers. I did see some ducks.

Mid-afternoon on the third day we pulled into Union Station in Chicago. The terminal building is one of the grand dames of the rail, a lofty white temple from the days of great public buildings. It is currently undergoing a renovation of its enormous skylight roof, but even with the scaffolding, it is an awe-inspiring piece of architecture. 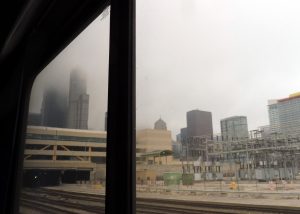 I opted for a night in Chicago before heading out again, though the four-hour connection time would have made leaving the same day no worry, even if our train had been late. The Chicago Metropolitan lounge is a large two-story refuge. There are beverages and snacks for free to enjoy while you wait, internet access, and places to work as well as relax. 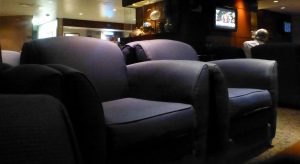 The Capitol Limited out of Chicago was yet again an evening departure. I could have taken a direct train to New York but I wanted to stop in Washington DC. My cabin this time was on the lower level. There is less rocking on the bottom but I couldn’t sleep with the shades open as I did on the upper level. The lights of stations and towns as we passed through was too much for even a sound sleeper like myself. 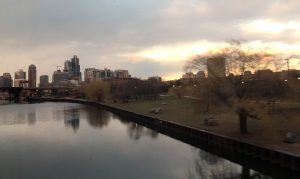 The morning revealed hilly countryside and a world apart from the one I’d I left only a few days before. I imagine these hills are beautiful in leaf and spectacular in the fall when the leaves are turning. For now, the branches are still bare and spring is still a promise.

There is still plenty of natural beauty but very little wilderness. Signs of human presence are almost everywhere among the trees and hills. 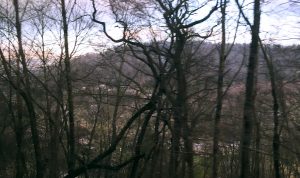 More human habitation means a view of small town life that is far from either coast. The older buildings have not been paved over to make room for glass towers like in the cities and there is an air of nostalgia as the train passes through. 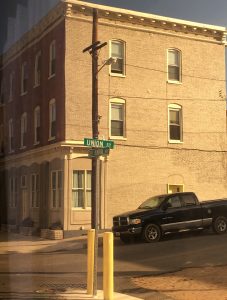 Around mid-day we pull into Washington where there is yet another marvelous train station and where you get another hit of how lofty and grand were the ideas of Americans back in the when the railroad was king. If you don’t live in the East, this is the perfect opportunity to stop and visit the nation’s capitol.  The cherry blossoms are out and that alone would be a reason to stay al least a night. I chose this route precisely because I wanted to come and visit the capitol for a while. Traveling by train lets you break up your trip with stops without any penalty. 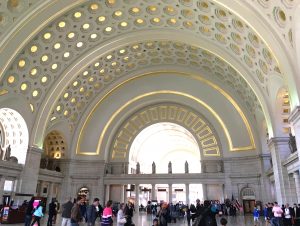 Trains run at almost any hour from DC to New York. You won’t ride a sleeper on this leg, but you can the Acela commuter train with amenities like free wifi. After the vast emptiness of the West, what you see as you go up the mid-Atlantic states is the giant engine of industry. Baltimore, Wilmington, Philadelphia, Newark, and New York: cities packed with people. Even Chicago did not have this feeling. It seemed to me like being inside one giant metropolitan machine spanning four states and powered by tens of millions of people. This America is a landscape of humans. When I stepped out of New York’s Penn Station into the caverns of Manhattan I felt like I’d traveled not only the 3000 mile physical distance from the West Coast, but a cultural distance to another America.

Cross the US at least once by train. It is a unique experience, and will enrich your life the way travel can by exposing you to novel experience and leaving you with lasting memories.

To book your transcontinental adventure:

June 25, 2019 Stephanie Colburn U.S. Attractions 0
DAY ONECrossing the Mississippi on a bridge between Wisconsin and Minnesota, we belt out ‘Ol’ Man River’ under clouded skies. Trees stand in the middle of the white-capped river waters without visible island support. No […]

April 12, 2019 Stephan Martin Restaurant Reviews 0
Rock & Reilly’s opening a new location at USC Village sounds like the perfect setting for a college venue. Rock & Reilly’s was made for , but while this newly created village has USC in […]

May 28, 2019 Meagan Sargent Worldwide Attractions 0
The sold out 2019 BottleRock Napa Valley, presented by JaM Cellars, has drawn to a close having entertained more than 120,000 attendees over the Memorial Day Weekend in historic downtown Napa.  In addition to headliners Imagine Dragons and Logic on Friday, Neil […]